A Greely musician is asking residents to stuff their stockings with something that can make a difference this Christmas.

In an 11th-hour campaign to capitalize on the Christmas season, Greely musician Larry Pegg has partnered with several shopkeepers in and around Osgoode who have agreed to sell his full-length album on their counters. All purchases of Before and Afterlife: The Theory of Positivity support the Do It For Daron charity founded in memory of Daron Richardson, daughter of Ottawa Senators assistant coach Luke Richardson. Daron died by suicide in 2010 at the age of 14.

Pegg has personal experience with the pain of losing a child; his own daughter died by suicide in 2007.

The album is $15. Fifty per cent of that will go to Do It For Daron, which funds Royal Ottawa Health Group research on how to best teach mental-health awareness in schools, provides mental-health education programs to high school students and hosts lunch conversations to facilitate dialog about mental health among parents and their kids.

Each store has also received a poster featuring a big, red heart, which Pegg encouraged shoppers to sign when they purchase the album.

“This signing ritual represents your personal recognition of the blast zone (of) those left behind by suicide, those deeply and forever affected by each loss to suicide,” Pegg said in an email. “Think of it as signing the Suicide Prevention Accord.”

“The heart poster will be a lasting impression and reminder of this commitment at each of the establishments where it is featured and the CDs sold,” he added.

For more information or to download a digital version of the album, visit lpgroove.ca.

If you purchase an album from a participating #MakeYourMark 4 #MentalHealth retailer, please Tweet about it! Here's a sample Tweet you can use: 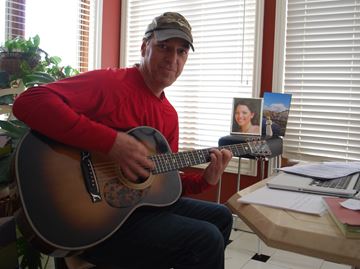 More information on The Cause